Our Adventures as a Team

The Value of Stepping Outside Your Comfort Zone

One of the great things about the Supple Collection is that we’re exploring uncharted territory. The way that we think about space and its ability to influence the way people learn and work is a relatively new concept. Sometimes it feels like we’re venturing into the unknown, which can be a bit nerve-wracking, but it’s also that which provides the excitement and adventure and makes work feel like play. And, although we stumble about sometimes, and fail our fair share of the time, usually the final results are far better than we expected them to be at the onset. So, we’ve come to understand there’s a great deal of value in stepping outside one’s comfort zone. 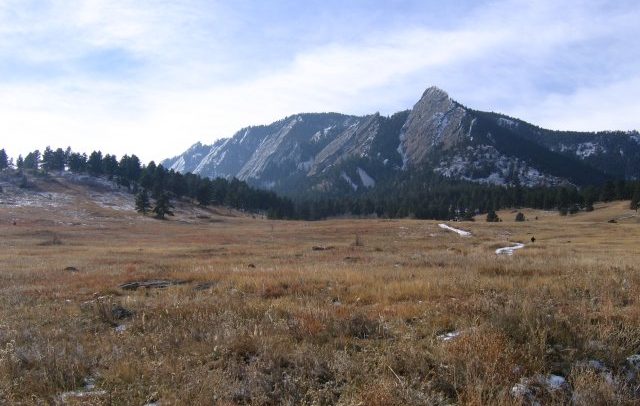 I was reminded of this recently during an adventure with my colleague, Ian Fohrman. Ian and I have been working together at The Public Works since 2006. Back then, Mike and I had only been in business for about a year. An old abandoned ski area in our hometown of Evergreen just up into the mountains west of Evergreen had been purchased and was looking to reopen. If there was going to be a ski area opening in our backyard, we were determined to play a part. Mike stalked the new owners and got us a meeting with the family who was creating the area they were calling Echo Mountain. We went up and asked a bunch of questions about the plans for the area, and found that they were planning to create a park with rails and jumps and maybe a half pipe. We told them that the property was a bit steep for a half pipe, but that we thought a park could potentially work well – if they could attract enough of this demographic away from the larger resorts to the west. Then we told them a bit about ourselves and decided that the best way that we could help them get started would be to help them figure out their brand mark and a large brand signage piece that would help them get a foundation for telling their story. When we came back to show them some of our ideas, we were introduced to Ian who was an intern from the University of Colorado. Unfortunately that Echo Mountain concept fell apart and has gone through a couple other ownership concepts, but Ian is still with us helping to run The Public Works’ media team. We’re so psyched he took a chance on us.

Although, on a daily basis Ian works alongside Mike, he and I have become close friends. Both of us spend a lot of time out in the back country adventuring. We enjoy exploring the edges of our abilities and our comfort zones. We spend a lot of time skiing and snowboarding in the backcountry, and big days out mt biking. We each had spent some small amount of time rock climbing and began to talk about a climb together. We picked a day in early November and decided on a route at the First Flatiron in Boulder, Colorado. It was a long, easy classic climb that I had been wanting to do for a long time, and Ian was interested because he had never climbed trad and this was a great introduction to the art of setting protection on an unbolted climb. Both of us were excited, though we hardly knew what to expect. 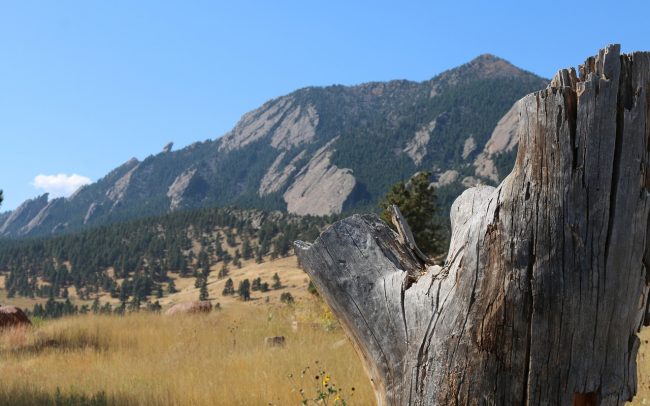 That morning, I drove to Golden and met Ian at his new home, which he had recently purchased. When I arrived, his girlfriend Brit gave me a quick tour of their new home, and we took our time hanging out and chatting. By the time we arrived in Boulder, it was already well past noon, the sun was high overhead, and even though it was winter, I reveled in it’s warmth on my shoulders. The trail ahead and the stunning landscape of the Rocky Mountains surrounding us amped up our excitement for the day together. The rich green of the pines contrasted sharply with the color of the hills before us, which were yellow-gold from the change in season. We took our time hiking up to the base of the climb where there were two small teams in front of us. 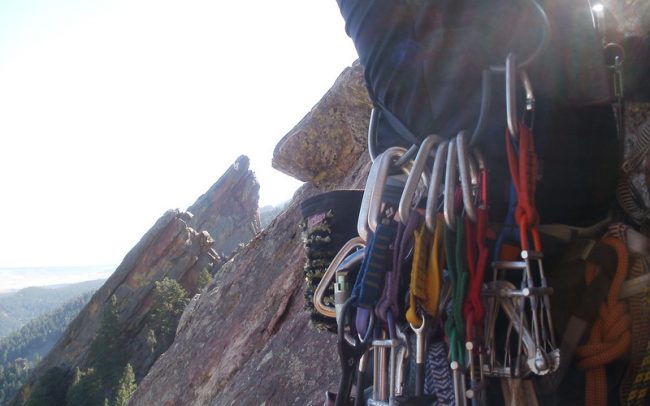 By the time we started climbing it was well into the afternoon. It was a real easy route. Both of us typically climb at a higher level, but although I had experience placing gear, it had been a long time since the last time I’d done a multiple pitch trad route, and I was excited that Ian was letting me lead.

After climbing for a while, we started to realize that the rope work was taking us a little longer than we had thought it would and the light from the sun had already begun to soften. By the time we reached the halfway point, it was already about five o’clock and the sun was closing on the ridge above us. 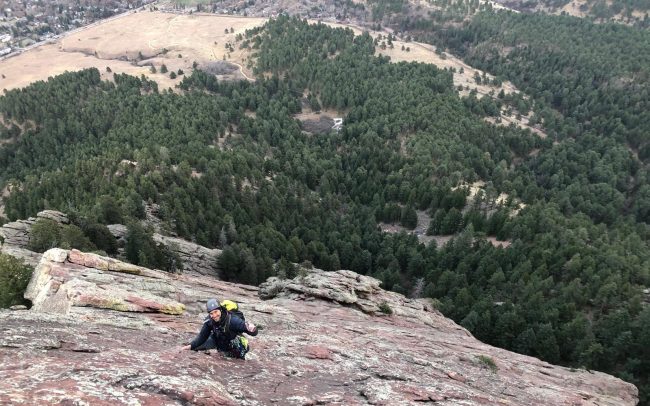 We reached the ridgeline just as the sun began to set over the mountains to the west and we stopped, pulled on another layer to push back the incoming cold. We enjoyed the beautiful sights all around us, had a little snack, and took some quick pictures. By the time we were ready to climb again it was time to get out our headlamps, which we had brought but hadn’t really thought that we would need. Ian’s headlamp started to wane as soon as he turned it on, but mine was strong. Since I was leading, this wasn’t too much of a problem, but it did make the climb a lot more challenging for Ian. Ian trusted me to lead us in the dark, so I told myself that I needed to trust myself.

We hadn’t realized how far up the ridgeline we still needed to climb to arrive at the belay station, and how much longer it would take in the dark, and how much harder it was going to be to communicate now that we had climbed out of the protection from the wind. By the time we got to the top, it was about nine o’clock. The last remains of daylight were long gone. We were still rapt by the view down over the city of Boulder and how great it was to be up there together. Once I was set up for the repel, I handed Ian my light so that he could get himself setup once I was on the ground and rapped off into the pitch dark. All around me, there was total darkness except for the light of a few stars. It felt like I was swimming way out into the ocean at night, engulfed in not knowing. Oh man, I love that feeling. There is just something about it that connects you to another human who is there by your side that nothing else in life can.

When we made it back to the parking lot it was late and we were tired, but we didn’t have to say anything to know that we both agreed that it had been a fantastic experience. The views from the Flatiron were stunning and the route itself had been interesting too. And, most importantly, both of us were able to step outside our comfort zone and, in doing so, experience something new and wonderful.

— Frank Phillips, Owner and Creative Director of the Supple Collection